The California Highway Patrol Mojave Area Office is looking for a few good men and women willing to give something back to their community. The Mojave area is now recruiting people 55 and older who will contribute volunteer time to the Mojave Area office. Lt. Julian Irigoyen, Commander of the Mojave Area CHP office, said he is seeking energetic and enthusiastic volunteers. The Lieutenant is looking for quality, motivated individuals that want to give back to their community in a positive way.

The volunteers perform a variety of duties that include administrative functions, participation in community events, directing traffic, and assisting officers as needed. They can also ride along with officers, serving as an extra set of eyes in search of vehicle code violations. Volunteers must be able to pass a background check, have a good driving record, and successfully complete an in house academy. Anyone interested in finding out more about this program may call Officer Darlena Dotson @ (661) 823-5500 or email dardotson@chp.ca.gov.

The Mojave Foundation strongly encourages residents to get involved with CHP, and donating our time is the best way to increase the connectivity between law enforcement and the community. Volunteers are still the best way to improve safety and security in Mojave. 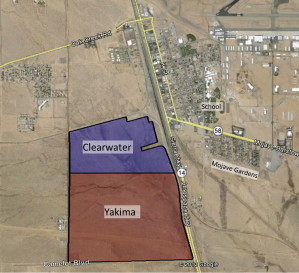 23 January: By a 4:1 vote the Kern County Planning Commission approved the Clearwater/Yakima solar project by Recurrent Energy of San Francisco. At 1 square mile, the project would be larger than Mojave’s downtown area, located west of Sierra highway and north of Camelot Boulevard. Proponents advocate that the project would produce 40 megawatts of clean renewable energy and create up to 200 temporary jobs. Critics claim the project, located just 1,400 feet west of a residential area and school, would release dust and other pollutants, kicked up by Mojave’s strong winds, causing health problems for children and elderly residents. Many residents support renewable energy, but resent the location. But Recurrent Energy claims this is the only parcel in Mojave with a single owner willing to sell the property, and it is located close to a power sub-stations installed by the wind companies.

Kern County provided a video conference in the Mojave Veteran’s Hall for residents to participate in the hearing, but most citizens left after midnight. The hearing, which lasted over seven hours, involved 13 other items, but the agenda was changed twice so that the Recurrent project was heard last. Opening comments began at 1:30 am, and the final vote was not reached until 2:30 am, by which time most residents in Bakersfield and Mojave had gone home. Click here to watch the hearing online.

Commissioners also approved the Fremont Valley water & solar project by Aquahelio of Beverly Hills, by a vote of 3:2. The Aquahelio project plans to take 114,000 acre feet (AF) of water (37 billion gal) per year from the Fremont Valley aquifer located north of Cal City. The Fremont valley aquifer contains about 1 million AF of known safe water, and possibly up to 7 million AF of unexplored water at deeper levels. Historically the aquifer has a natural recharge rate of approximately 15,000 AF per year. Proponents argue that the project is necessary for Kern County’s long term water security. Critics argue that the project will gradually deplete a precious natural resource, sending water to other areas of Kern County and could be used for “fracking” or other industrial uses. Critics also argue that the project is an attempt to control a majority of East Kern’s water resources, making the entire county reliant on one company if drought conditions persist. Aquahelio offered a last-minute compromise to the commission, offering to stagger the water extraction to 5,000 AF in the first year, 10,000 in year two, 20,000 AF in year three, 50,000 in year four, 80,000 in year five, and 114,000 by year eight to continue indefinitely. The compromise also selects a joint Kern/Aquahelio commission to oversee the project to ensure that the company does not destroy ground water or private wells as extraction rates ramp up.

Opening comments began at 11:30 pm, and public comments continued well after midnight. Commissioners appeared divided as they began deliberations around 1:00 am with three out of five initially intending to vote “no” on the water portion of the project. However, when Aquahelio asked the commission to vote on the entire water and solar project in its entirety, one commissioner switched to a “yes” vote, delivering an approval for the project. Both projects are now referred to the Board of Supervisors who will make the ultimate determination whether these projects will go forward. Click here to watch the hearing online.

The Mojave Foundation is primarily concerned for the health and safety of our residents, and our long-term water security. Although we support renewable energy, and solar in particular, we must not disturb our ancient desert ecosystem before we have a credible plan in place to minimize the health impacts to our residents. We also call on Kern County to ensure that the Fremont Valley has a sustainable source of water for generations by providing intense scrutiny and oversight of all consumers to ensure that water extraction does not exceed our natural recharge rate.

January 20: Mojave’s bi-weekly Entrepreneurship Workshop kicked off again with Raimone Roberts of the Small Business Development Center (SBDC) in Los Angeles. With approximately two dozen in attendance from all over the Antelope Valley, Raimone challenged residents and small business owners to rethink their vision for 2014. “Where will you be on January 16, 2015?” he asked the audience, and gave them “homework” to rethink what they did last year and challenge themselves in 2014. Highlights of last Wednesday’s meeting were to Set Goals, Dream Big, and Imagine.
1) What is your business, product or service?
2) Get mission critical – what is your mission? Has to be simple, clear and practical.
3) Focus on a better business. Build and strengthen your skill set.
4) Daily Habits – Are they progressing you or hindering you.
5) Relationships – People do not get where they are alone
6) Network – Build relationships, build community

Roberts went into detail on each step of his challenge, and looks forward to seeing what entrepreneurs come back with next week – giving entrepreneurs a direction and goal to focus their energies. There were real estate owners in this week’s meeting, potential investors, Career Services representatives, and small business mentors – all willing and eager to provide financial and inspirational support to aspiring entrepreneurs throughout the Antelope Valley.

The Mojave Foundation is dedicated to proving aspiring entrepreneurs with the support and resources necessary to start their own business – right here in Mojave, and the Antelope Valley. Our classes are free and open to the public, and a great way to network and meet other people with possible resources to compliment your business idea. Our next workshop is Wednesday January 29th at 6pm at Anthony’s Grill in Mojave. If you have any questions, call Mike or Susan Fortuna at 661-824-2275, or mojavesusan@gmx.com.

January 3: “I can’t believe it’s been five years” says store owner James Stokes, “things were really rough for those first two and a half years, but we never lost our ‘personal touch’, and building a relationship with the community, and we really built up a loyal customer base here in Mojave”.  Stoken’s, a Mojave landmark, has been recently awarded “Business of the Year” by the Mojave Chamber of Commerce, and ranked number 1 on Yelp, and has seen business steadily expand since emerging from the ashes of the financial crisis in 2009. “It’s amazing what you can achieve with the right people, and passion, and we have a great staff that is passionate about quality and preserving that relationship with our customers. Stokens, located one block east of Sierra highway on Belshaw Street, has become the central meeting place in Mojave for community discussion and social gatherings. Stokes has built up an especially loyal relationship among workers from the airport and renewable energy companies, whom Stokes credits with keeping him afloat during the rough times. “We try to get to know each of our customers who come in the shop, and we ask what they need and what they want to see.”

Local residents held their breath in 2009 when Jame Stokes purchased the old library, an historic Mojave landmark. But Stoken’s was universally acclaimed when he preserved the classic ambiance of the building while serving quality food and paying homage to Mojave’s history. Stoken’s, generally known for its high quality sandwiches and natural ingredients, has become a mainstay of motorists throughout southern California. “We get a lot of the traffic between L.A. and Mammoth,” cites Stokes, “and we want people to learn a little about Mojave while they’re here.” Stokes, a local job creator with five full-time employees, sees opportunity in Mojave. “We want to keep growing, responsibly, with the community – and we think there’s a lot of potential in this town.”

The Mojave Foundation celebrates Stoken’s success, and their entrepreneurial zeal. We appreciate Stoke’s commitment to the community – demonstrating that there is a market for high-quality service and offering to share that success with other aspiring entrepreneurs. We wish James and Leigh and his staff even more success in 2014.