May 15: Mojave’s own Desert Truck Service hosted a free class on air brake repair open to the entire community. The class was taught by a representative of Haldex Group, a leading supplier of air brake parts and components for heavy trucks. “We put this class on about once a year” said Brenda Segal, co-owner of Desert Truck Service. “It’s open to anybody who wants to learn about air brakes and heavy truck repair.”

Desert Truck Service is also hiring. Located on Hwy-58, just across from the Mojave Air & Space Port, Desert Truck celebrated 30 years in Mojave on April 13, and they have been a reliable job creator and community partner. “We never take down our Help Wanted sign” said Mrs. Segal. Qualified applicants need only be 25 years old with a California drivers license, clean driving record, and drug free. Desert Truck is typically looking for technicians, service writers, or drivers, and is always willing to train new skills. The Mojave Foundation congratulates Desert Truck Service on 30 years in Mojave, and salutes their commitment to the community.

The U.S. Department of Agriculture (USDA) has a housing grant up to $7,500 for Kern County residents who are (a) low income, (b) own their own home, and (c) at least 62 years old. Qualified recipients must use licensed contractors, and use the money for home repairs such as broken windows, roofing, and health & safety upgrades. Applicants must also live in the home being repaired and demonstrate “low” or “very low” income (see below).

The USDA also has low interest loans up to $20,000 available to residents who are (a) low income, and (b) own their own home. Loans have an interest rate of 1 percent, and the payback period for loan is up to 20 years. Qualified recipients must also have an acceptable credit history, including no collections, judgments, liens, or delinquent federal debts.

For questions contact Mary Norton at the USDA branch in Bakersfield at 661-336-0976 (ext. 133), or Mary.Norton@USDA.CA.GOV. Click here for an application. Kern County Income Requirements: The Mojave Foundation believes that basic home repair is critical to providing a safer and healthier community, and inspiring greater pride in our community. We are willing to help residents fill out applications and win grants or loans to repair their houses. For help, contact Marlena Rowely at Marlena@MojaveFoundation.org 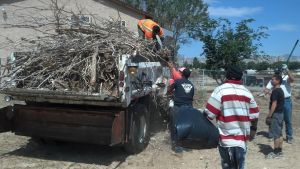 May 23: Residents throughout Mojave joined forces on Friday morning to embark on a massive project to clean up the entire Western Village neighborhood in Mojave. About 30 volunteers, mostly from the affected neighborhood, removed couches, mattresses, and garbage from the streets and alleyways of Edwin, Arthur and Milton streets. Four County agencies contributed to this effort including Code Compliance, Waste Management, County Roads and the Kern County Sheriff’s Office (KCSO). Most of the volunteers were informed of the event during a door-to-door campaign conducted by The Mojave Foundation the previous Monday. The volunteers also inspired many neighbors to come outside during the cleanup with their kids and relatives and start picking up their own yards. The Mojave Foundation is confident that the local residents are now invested in helping to KEEP the neighborhood clean and make this cleanup sustainable.

Friday’s cleanup was a joint effort between The Mojave Foundation, local volunteers and four County agencies. Code Compliance provided the trash bags and gloves, Waste Management provided access to the dump, KCSO proved the CSU volunteers for security, and most importantly, Kern County Roads provided three dump trucks and five drivers, which was critical this event. County Roads employees – some of which are from Mojave – hauled away 11 dump-truck loads in less than 3 hours (equivalent to about 25 pickup trucks full). Under the leadership of Mojave Roads Foreman, Dan Duckworth, volunteers were able to work at maximum efficiency for three hours, removing every mattress, couch, and fire hazard in Western Village. The Mojave Foundation considers this a “force multiplier”, and salutes Mr. Duckworth and his crew’s professionalism and proficiency. 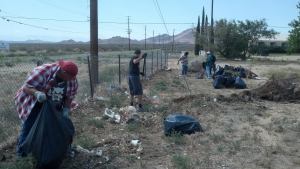 The Mojave Foundation would also like to credit Leon Ryder for conceiving of Friday’s cleanup, and inspiring residents and volunteers all over Mojave to pitch in. Mr. Ryder, who spontaneously decided to paint over some graffiti in his neighborhood several months ago, has inspired a grass-roots miniature revolution in Western Village and all over Mojave. Mr. Ryder and The Mojave Foundation are now working directly with residents and Kern County General Services to remove graffiti immediately and efficiently. The Mojave Foundation salutes Mr. Ryder’s “leadership by example” and countless volunteers who made this and other cleanups possible. For more information on how you can volunteer fill out one of our volunteer forms. Click here for information on how you can donate to the cause.

May 26: Mojave remembered the the fallen on this Memorial Day, in the Mojave Cemetery. The event was organized by Mojave’s own Cathy Hansen, and featured speakers Doug Clipperton, of the Mojave Chamber of Commerce, Flora Belle Reece, who transported fighter planes across the country in WWII, and Captain Todd Quelet, a Civil Affairs Officer and veteran of Afghanistan. Mr. Clipperton described the sacrifices that that his father endured as a B-17 pilot in WWII, and the hundreds of pilots lost in service to their cause. Ms Reece described the events of Pearl Harbor through the eyes of Admiral Nimitz, and despite the thousands of lives lost, how the United States emerged from that tragedy with remarkable luck, perseverance and determination.

CPT Quelet commemorated  the service men and women and civilians who have given their last full measure of devotion in the service of their country in Iraq and Afghanistan. He explained how they died promoting “American” values abroad, but that these values are so universal that they transcend any one country, and belong to the world. CPT Quelet went on to call on the living to honor the dead by continuing their work here at home by investing in our own communities. (To see a video of the speech click here.)

May 19: The Mojave Queens teamed up with the Mojave Foundation and several local volunteers to knock on doors in Western Village, to tell residents about a cleanup in that Neighborhood on Friday, May 23rd at 8:00 a.m. Mojave Queens included Miss Mojave, Merysa Rangel, a junior at Mojave High; Ana Marquiz, Miss Junior Mojave; and Rhaylene Joaquin, Little Miss Mojave. “We all need to pull together to keep this place clean” said volunteer Isaac Martin, a junior at Mojave High, “These guys are trying to do a good thing, and we all need to pitch in.” Mojave’s own volunteer police squad, Citizen Service Unit (CSU), also participated, providing security and overwatch while our volunteers walked door to door.

The cleanup on Friday will target three areas in Western Village that have accumulated garbage and furniture for years, including the desert and alley behind Edwin Street, and the apartments on Milton. The Mojave Foundation is determined to partner with local residents in the affected area to help remove the trash and keep the neighborhood clean once and for all. Volunteers also passed out information on Neighborhood Watch and graffiti consent forms, which allow The Mojave Foundation to remove graffiti immediately with the permission of the property owner. The Mojave Foundation would also like thank Leon Ryder for organizing the door-to-door campaign and the cleanup this Friday.

May 7: The Mojave Coin wash is now open again, and the burglar has been identified by the Kern County Sheriff’s Office. The Coin Wash has been closed since April 7th when a burglar destroyed several coin dispensers and washers and stole several hundred dollars of quarters. The Coin Wash is now under a new management, and open longer hours. The new manager, Michael Smoot, a long-time Mojave resident, is leading a new generation of young Entrepreneurs in Mojave. Mr. Smoot, 32, spent the last two weeks repairing the damaged equipment in the building and restoring previously broken dryers to accommodate more customers than ever before. Mr. Smoot will also be on site at all times to ensure that all customers have a safe and pleasant experience, and to guard against future vandals.

The community has universally rejoiced at the return of the coin wash. “I am so happy to have the Coin Wash back” said local resident, Ethel Brooks, “One man came in on Monday when they first reopened and did what looked like three weeks of laundry! We’re going to keep Mike on FULL TIME!” Other residents rejoiced in the restored sense of pride. “I had to have somebody else to wash my clothes, it was embarrassing” said long-time resident Mama-Bear, “I want to wash my own clothes, thank you very much!”

The Mojave Foundation applauds Mr. Smoot for being the first of a new generation of entrepreneurs in Mojave, and restoring a critical service to the community. We also commend the local shopkeepers and residents who identified the suspected burglar to the Kern County Sheriff’s.

April 29: By Dan Kreigh. For the stock race, normally eight planes IS a crowded field. We had FIFTEEN race planes!!! It sounded like a heard of confused mosquitoes feeling their way around the pylons. We had six P-51s, six T-28s, one P-40, one Duet and one Champ. The Brian Min’s Duet was the only thrust vectored controlled entry using two propellers. (I think it hit the pylon) Veteran race pilot Stan Hinman handedly won the Gold Stock Race with an early P-51 model.

The Unlimited race was equally chaotic insane shear–pandemonium impressive!!  These were the reckless fast boys!!  Racers ran the gambit which included fearless IFO’s, THREE ducted fan jets, an Icon, a Stryker, T-28’s …..and misc…. In the end, rookie Colin Bowman took the Gold Unlimited with his micro Habu ducted fan jet with some smooth precise flying.  But there are reported rumors that there are some pretty fast planes in the works ….so savor your victory while you can Colin….. 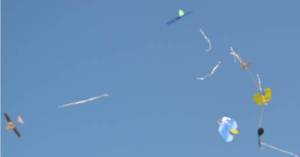 Last but not least, the combat round took a dubious turn when IFO piloted by Mason Hutchison snagged and drug two models behind it.  Mason had a regular streamer and a second “legal” mylar streamer.  But the un-cutable mylar streamer tangled in the props of two hapless models pulling them along like flies stuck to fly paper.  Interesting strategy Mason….  With three models stuck together as one, Mason got the most points and won the first Combat round!  Below, Mason’s black IFO is pictured dragging Jeromy’s IFO and Elliot’s P-51 around….  Also shown is Shalom Johnson’s Icon model in the combat mix.

Each winner gets a perpetual trophy that is handed from winner to winner with the new winner’s name on it.  A record of the past winners is also recorded on the trophies. Congratulations to Stan Hinman, Colin Bowman, Mason Hutchison and Erik Lassen (for being brave enough to enter the only Champ). More Pictures and Videos can be seen at:
U:\Engineering Department\Au_Howard
Z:\Scaled People Facilities Special Events\Company Events\Air Races\2014_Season

Next Race, Friday May 16th, at the Mojave Airport on Byers’ road, (behind the Sheriff station), 9:00 break!!