Todd Quelet is the Founder and Executive Director of the Mojave Foundation. As Executive Director, Todd is focused on interfacing with government officials, establishing the strategic direction of the organization, and advocating on behalf of Mojave residents and businesses. 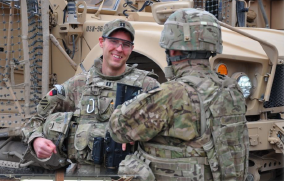 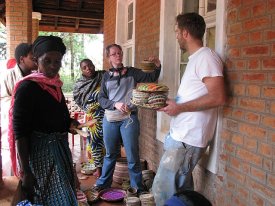 Todd is a Captain in the US Army Reserves, and most recently served a tour in Afghanistan as a Civil Affairs officer with the Provincial Reconstruction Team (PRT) in Kandahar Afghanistan. In his civilian career, Todd is the Site Manager of Stratolaunch Systems, a Paul Allen project, building the world’s largest aircraft to air launch rockets to low earth orbit. Todd is also an Adjunct Professor of Economics and Political Science at Cerro Coso Community College. Previously, Todd worked as an economic analyst with the Department of Defense in Washington DC, and spent much of his time as a community organizer in Detroit, MI, with Habitat for Humanity, and with a humanitarian agency in east Africa. Todd has a Bachelor’s degree in Business and Industrial Management, and a Master’s degree in Economics and International Relations from American University in Washington, DC.

Karina Drees-Quelet is the Treasurer and Secretary of the Mojave Foundation. Karina is also the General Manager for the Mojave Air & Space Port (MASP) where she is responsible for running the largest public institution in southeast Kern County. Karina is responsible for setting the strategic direction of the airport, new business development, legislative affairs, and advocating on behalf of the 60 companies who operate on the airport and the “New Space” industry at large. Prior to MASP, Karina held senior positions in strategy, business development and operations for growing technology companies ranging from startups to large public companies. Karina has a Bachelor’s degree in Finance, and a Master’s of Business Administration from the Sloan School of Management at MIT.

Kevin Mickey is a founding member of the board of directors. Kevin is also Vice President of Advanced Design at Northrop Grumman, where he is responsible for all advanced aircraft design activities within the Aerospace Systems division. Previously Kevin was President and CEO of Scaled Composites, a subsidiary of NGC, and the largest employer in Mojave. Kevin is a 30 year veteran of aerospace and has participated over 30 manned flight vehicles and was a senior member of the SpaceShipOne team that won the $10 million Ansari X-prize in 2004 for the first privately-funded vehicle to reach low-earth orbit. Kevin was also born in Mojave and has deep ties to the community. Kevin went to Mojave High, and has worked in Mojave for most of his career. Kevin holds a Bachelor of Science in Business/Technical Management from the University of LaVerne and a Masters in Business Administration in Aviation from Embry-Riddle Aeronautical University. He was appointed by the Mayor of Palmdale to Vice Chairman of the Aviation and Aerospace Commission, and is a frequent speaker at organizations such as Coca-Cola, British American Business Counsel, and Society of Plastics Engineers and the Society for the Advancement of Materials and Processes (SAMPE). Kevin sits on multiple boards at educational and nonprofit organization in the Antelope Valley.

Enrico Palermo is a founding member of the board of directors. Enrico is also Executive Vice President and General manager at The Spaceship Company (TSC), a subsidiary of Virgin Galactic, located on the Mojave Air & Space Port. TSC is building the world’s first fleet of commercial spaceships and carrier aircraft intended to make widespread space travel a reality. Enrico directs and leads TSC’s operations in Mojave including engineering, supply chain, quality assurance, production and business infrastructure functions. Prior to joining TSC, Enrico worked at his parent company, Virgin Galactic, in Mojave and London. Enrico lives in Mojave with his wife, Nadia, and two sons, and they have been extremely involved in community development since moving here in 2010. Enrico also sits on the Revitalize Mojave committee, under the Chamber of Commerce. Enrico is an alumni of the International Space University and has a Bachelor of Engineering (Mechanical) and Bachelor of Science (Physics, Mathematics) from the University of Western Australia. 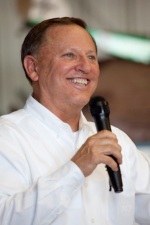 Stuart Witt is a member of the board of advisers. Stuart currently runs his own consulting firm, advising commercial space operators and U.S. government officials on “New Space” policy and strategy. Stuart was the former CEO and General Manager of Mojave Air & Space Port, where he oversaw a massive expansion of the commercial space industry in Mojave. Stuart presided over numerous historical events, such as SpaceShipOne in 2004, and the development of SpaceShipTwo, and Stratolaunch. A local son, Stuart was raised in Onyx California, graduated from Kern Valley High School, and graduated California State University Northridge. He had a distinguished career as a Naval aviator, graduating the Naval Fighter Weapons School (TOPGUN) in 1980, before flying F-14 Tomcats on a carrier in the Mediterranean, and FA-18 Hornets at China Lake. Stuart and his wife Susan live in Ridgecrest, California, and they have three grown sons. Stuart has been active in Kern County for 40 years, holding multiple board seats among educational and nonprofit institutions throughout the Antelope Valley. He is a 32-year member of the Society of Experimental Test Pilots, and a founding member of the Commercial Spaceflight Federation.

Leon Ryder is a volunteer with the Mojave Foundation and leads Mojave’s graffiti removal program. Leon liaises between property owners and Kern County to ensure vandalism is removed quickly and efficiently. Leon is actively involved in the community, participating in neighborhood cleanup activities and defending residents from unwanted health and safety risks. Leon is a Deacon at the Landmark Missionary Baptist Church in Mojave where he serves as an adult Sunday school teacher and music coordinator. Leon is also an Army veteran of the Vietnam war, and a retired school teacher. Leon taught math and science at Mojave High School and Middle School for 34 years; and spent the last four years as Technology Specialist for Mojave Unified School District. Leon and his wife raised their three children in Mojave.