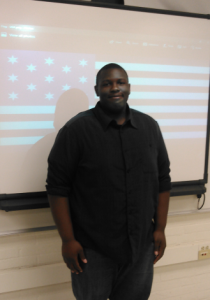 April 17, 2017. Mojave’s own Christion Seymour has been awarded the Award of Merit from Congressman Kevin McCarthy, our U.S. Representative from California’s 23rd District. The Merit Award was created to recognize outstanding high school students who have demonstrated exemplary school citizenship, volunteerism, community service, involvement in extracurricular activities, leadership skills and have earned a GPA of 3.5 or higher. Earlier this year, high school principals were invited to select one outstanding graduating senior per school to receive the award, and Mr. Seymour was selected among a graduating class of 32. Mr. Seymour, 17, is an extremely talented individual, participating in an eclectic range of activities, from band, to the science club, to being a leader on his Champion football team – all while maintaining a 3.8 GPA. Mr. Seymour has lived in Mojave with his proud Mother Katherine since 2010. He has been an active member of his student body and our community, and will be attending William Jessup University in Rocklin, California, near Sacramento. Mr. Seymour plans to major is behavioral science and aspires to be a forensic psychologist for the FBI.

As the Majority Leader, Congressman McCarthy is the second-most senior member of the U.S. House of Representatives, and has represented the 23rd district since 2006, which includes parts of Kern and Inyo Counties. About the award, Rep. McCarthy previously said “This award is intended to honor the achievements of our communities’ best and brightest, recognizing their positive achievements and inspiring all of our students to work toward their goals,” said Congressman McCarthy.  “By coming together and recognizing these students, I believe we help to create a positive community environment that supports the hard work of the next generation’s leaders.”